My first night of data collection in 2014. I was nervous heading to my first field site of the summer, Smith River National Recreation Area (NRA), specifically Big Flat Campground. While I was carrying out the exact same protocols last summer, it never really felt like field work. I had cell phone service, power outlets and internet! This summer, I will have none of those things. While not a bad thing, it adds to the challenge of field work, requiring all of my equipment to be sustainable from a collection of marine and motorcycle 12V batteries. Some trouble started before I even left, with my setup for powering my laptop during playback nights (a system of marine battery, connected to an car inverter that is then connected to my laptop) not working. Luckily, it turned out to just be a blown fuse and was easily fixed.

With that out of the way, and the car loaded up I headed north. Smith River NRA is about two hours north of Arcata, just past the Redwood National and State Park system. I arrived with plenty of time before sunset, allowing my to scope out the bats (happily chirping away in their bat boxes), and set up my equipment. I chose a spot along a natural forest corridor, which the bats used to make their way down to the stream each night. To my dismay, when I went to test my camera setup for the 3rd or 4th time, the DVR was no longer receiving power from my battery. I attempted to troubleshoot, but despite my best efforts, I could not figure out what was going on. I finally settled on an arrangement I thought would work. However, the next morning when I checked the memory card, the video had stopped around midnight. Not the start I had hoped for, but there was still time to fix things.

After discovering that my DVR had failed the night before, I decided to make a trip into Crescent City to salvage my equipment. Mostly this meant picking up several extra packs of AA batteries, as well as a new universal car adaptor with multiple plug setup. I have a system where a 12V battery is plugged into the end of a car adaptor plug, which allows me to power several devices. With the new power adaptor, I would be able to use my backup DVR system, a screened AV500. Hopefully this new setup will allow continuous video recording through the night.

Second DVR setup worked! I was finally starting to feel better about the week. After another run into town to pick up a USB connector for the DVR, I decided to finally try out some trails. I chose Craig’s Creek trail, which followed along the western ridge of the Smith River. It was hot (almost 90 degrees!), which living near the coast had not adequately prepared me for. I walked along the trail for about an hour before deciding to turn around and head back. After soaking in some Vitamin D, I headed back to the campsite. Tonight was my first night of playbacks, and I wanted to give myself plenty of time to set up all my equipment. For the first night, I randomly chose to do playbacks of Myotis social calls. 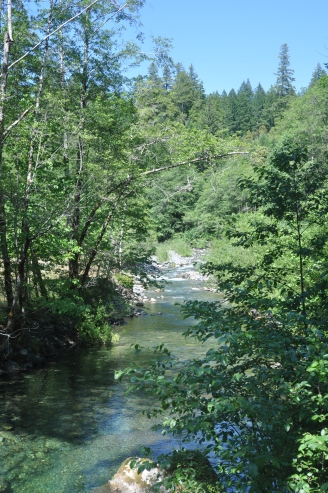 I have to admit, I was a little relieved to learn this morning that both my video and playbacks did not fail during the night. It was my first time powering my laptop using a 12V battery and my track record for the week hadn’t been great. I spent the morning looking at some of my collected data, organizing photos and files. When it started to get warm, I headed out to check out some trails. This time I chose the Myrtle Creek Interpretative trail. As I was getting things ready at the trailhead, some other hikers informed me that the trail was closed about halfway through, but I decided to check it out anyway. It ended up being a really informative trail, with nicely marked interpretative signs.

The trail showcased some of the unique features of the Smith River ecosystem, particularly the two major soil types. The soil that supports redwood and Douglas-fir forests is common and found throughout the north coast region. However, the Smith River NRA also has a more unusual soil that is derived from iron and magnesium rich rock, commonly referred to as serpentine soils. Serpentine soils have a dramatic effect on vegetation, since many common plant species are unable to support themselves on the unusual nutrient combinations. However, despite its limitations, serpentine soils are fairly diverse, and there are many plants that only grow on serpentine soils (called serpentine endemics). Serpentine rock is a gray-green color, and can be identified by a soapy, slippery feel. It is also a major reason for the distinctive blue-green color of the Smith River itself.

In addition to demonstrating serpentine soils, the Myrtle Creek trail also displayed signs of the area’s historic mining industry. The creek was one of the first and most productive gold discoveries in Del Norte Country, discovered in 1853. Gold mining was originally done through panning, and eventually was done through hydraulic mining. Along the trail there was still evidence of old mining efforts, including mining ditches, wooden gates and hydraulic monitors, as well as the recovering and successional vegetations from miner cleared and burned areas.

Back at the camp and roost site, it was my second playback night, this time of Free-tailed bat echolocation calls. About an hour or two after dark, I double-checked my equipment to make sure everything was running okay. I then investigated the now empty bat boxes. Unlike last year in the inn attic, it is much more difficult to see the bats when they are crammed into the box. Though maybe still a little earlier, I wanted to check for signs of pups, which would identify the roost as a maternity colony. The boxes were empty, so I was unable to make any conclusions about the sex composition of the roost. 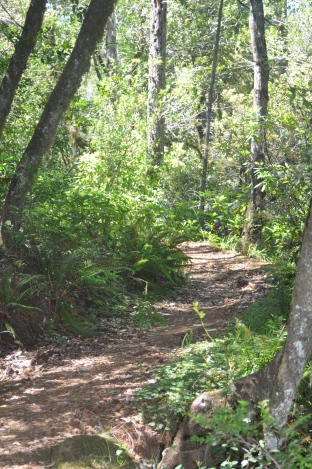 When I returned in the morning to pick up my recording equipment, the video seemed to have stopped working. Looking through the night’s videos, luckily it had only stopped working in the last half hour of the night, just prior to sunrise and so not too much of the night’s data was lost. I took down the camera and set it aside to do some troubleshooting later in the day. Sometimes nightly condensation and dew gets into the wires and can cause trouble, though in my experience it has never been permanent.

With that set aside, but still troubling, I decided to explore a little closer to camp.  About four miles from Big Flat campground was Dry Lake. The lake was pretty wet, so a little bit of a misnomer. There was a short trail that took me around the lake, which was covered in a variety of plants, with numerous dragonflies, lacewings, butterflies and other winged insects visiting its surfaces. As I was leaving, some men pulled up with their fishing gear, to take advantage of the wildlife beneath the water’s surface.

Having given my gear ample time to dry out, I returned to the campsite to check my camera set up. To my dismay, despite various ways to hooking up and connecting the camera, nothing seemed to work. After fighting off panic, I decided I needed to return home to fetch my spare cameras, kicking myself for not having brought them in the first place. I won’t be making that mistake again. I made the two-hour drive home, grabbed my cameras and headed straight back, making it just as the sun was beginning to set. Luckily, it seemed the back up camera was working with the setup, and I was able to get everything going only 20 minutes past sunset. Or so I thought. 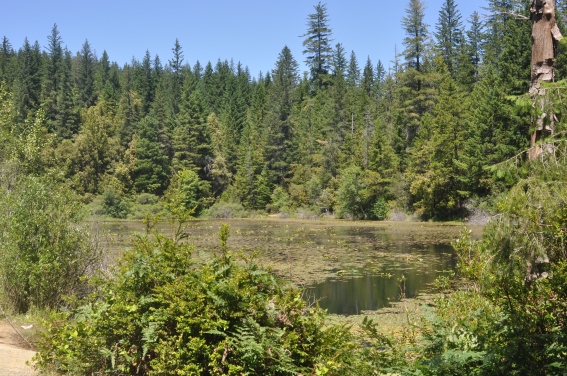 Woke up and quickly learned that despite my efforts last night, my video recording system failed completely. Even now, I am not really sure what went wrong, as not a single minute of video recorded, leaving me to conclude user error (i.e. I messed up). Another example of a frustrating moment in field biology, however I knew there was no use stressing over it too much.

I headed out to check out another botanical area, referred to as the Darlingtonia trail.  Darlingtonia, also called the California Pitcher Plant is an example of a serpentine soil loving plant. These carnivorous plants are usually found along perpetually wet areas, such as seeps or bogs. The hood and appendages of the plant secrete nectar that lures insects to the inside of the plant. Once inside, the transparent back of the hood tricks the insect into thinking it is a way out, but the slippery interior makes it impossible for insects to crawl out. The insects then slip into the water at the end of the “pitcher” and drown, where microbial organisms consume the insect and release essential minutes to the plant itself. The plants themselves look a little like cobras, with their tongues sticking out.

Example of the Cobra with split tongue

Following the botanical area, I hiked along the French Hill trail, which started along highway 199 and climbed for about 3 miles to where it met with French Hill Road. It was a nice hike, just challenging enough. Following the hike, I soothed my hot body and still slightly frazzled emotions with a chocolate milkshake at She-She’s, the local (and only) diner in the area.

Inside out flowers on the French Hill Trail

Having finished my playback nights, tonight was another control night, consisting of just video and acoustic monitoring at my bat box. Strangely, when I hooked everything up, and even a few hours after when I double-checked my equipment, everything was working perfectly. It was as if the last day or two had never happened. Slightly frustrated, but mostly relieved, I went to bed that night praying to the Mayan and Caribbean bat ancestor gods that things would go the way they were supposed to.

After retrieving my equipment in the morning, it appeared my prayers had not gone unanswered and everything seemed to have worked. The weather had cooled down quite a bit, and after some exploring of local trails, I spent the afternoon reading in the sunshine.

As it approached sundown, I started to set up my equipment. However, the video camera was again not working. I tried multiple set ups, and even tried using both of my back-up cameras, but nothing was working. My patience with these electronics had reached a breaking point, and I made the executive decision to just return home, a night early. Once home, I would have the time and resources (such as internet and phone, as well as access to my more electronic savvy advisor) to more thoroughly troubleshoot my equipment and make the appropriate repairs/changes.

Despite the frustrations, I don’t want to sound like I am complaining. Frustrations, mistakes, lost data and more are all part of field work. Equipment malfunctions, batteries break, it rains, study animals die or radio collars fall off, floods wipe away vegetation plots…the list goes on. However, it is these challenges that make field work rewarding. The first week of data collection always has its ups and downs, and I will be able to take what I learned this week and apply it to the rest of my season. Up next, I’ll describe my second week of data collection and exploration in Umqua National Forest, Oregon.