Based on my observations this past spring and into fall, these little guys probably started showing up around mid April. Just look at those cute little faces! 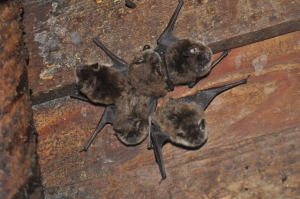 As the season progressed and the North Coast started to heat up (as much as a coastal redwood habitat can), more and more bats moved in to their summer vacation homes.

A maternity colony, many were visibly pregnant by the beginning of July, with the first pup spotted around that time as well. I wasn’t able to capture any pup pictures, since I was trying to limit my disturbance during that time. 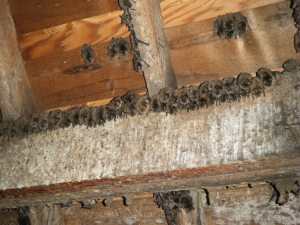 Getting snuggly in the attic

As I write this post now, they have moved on to new locations, most likely seeking cooler climates for the winter (wait…what?) Now, that doesn’t seem very intuitive and is the opposite of what many animals (including us) want to do. Bats are able to enter into a reduced metabolic state called torpor, cooling their body temperatures and reducing their need to eat, drink and even breathe! Moving into cool and humid places such as caves makes it easier to enter torpor, making it advantageous for these little guys to move to cooler places.